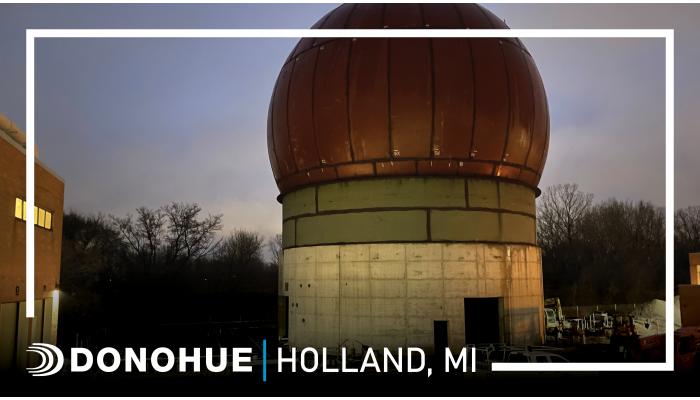 On March 22 and 23, the Michigan Water Environment Association (MWEA) hosted their annual Biosolids Conference in Holland, Michigan. As part of the conference, tours were held at the Holland Board of Public Works (HBPW) Water Reclamation Facility (WRF). Donohue was honored to assist the HBPW staff, guiding tours and highlighting our collaborative efforts on biosolids improvements.

The WRF treats wastewater from the City of Holland and four area townships. The plant receives significant flows and loadings from several food processing facilities in the region. HBPW retained Donohue to evaluate potential improvements to their solids treatment train. HBPW currently thickens waste activated sludge (WAS) using gravity belt thickening. A little more than half of the thickened WAS is stored, lime stabilized, and land applied as a Class B liquid. The remainder of the thickened WAS is mixed with primary sludge and dewatered using dewatering screw presses. Cake pumps are used to move the solids to roll-off containers, which are then sent to landfill.

Although HBPW had recently upgraded their solids treatment equipment, increased solids loading and challenges in biosolids disposal was causing their existing solids storage tanks to reach capacity. Furthermore, landfilling fees were increasing while the annual quantity of biosolids accepted by the local landfill was decreasing. HBPW evaluated multiple biosolids treatment and disposal alternatives to determine the most sustainable and cost effective investment for future biosolids handling, storage, and disposal. The analysis determined that the most advantageous long-term solution for biosolids management was anaerobic digestion to create a Class A product.

In 2019-2020 Donohue designed the biosolids improvements, which consist of modified primary and WAS thickening, pasteurization (to achieve Class A biosolids) prior to the digester, an egg-shaped anaerobic digester, post-aerobic digestion to control ammonia, and revisions to solids dewatering prior to loadout to either land application or landfill. Other important project components are odor control and methane gas utilization produced in the digester.

Construction is well underway with components of the thickening and odor control system complete and full project completion scheduled for July 2023. The project is being funded with a State Revolving Fund (SRF) loan that includes $6M in debt forgiveness through the use of Green Reserve funds.